Over 40 Years of Experience
and No Fee Unless You Win!Contact Us NowFor a Free Consultation
Home
Practice Areas
Car Accident
Road Rage as Accident Causation 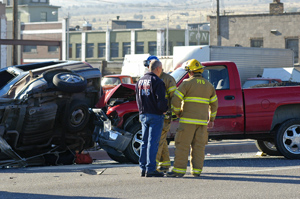 Imagine you are enjoying a Sunday drive in the sunshine. Your loved ones are with you and the day is fine. You are all happily enjoying the scenery when a car approaches fast from behind and tries to pass you. You notice them gesturing wildly and weaving all over the road, flashing their lights. The road isn’t quite wide enough however, so the angry driver rides your tail bumper and honks incessantly until you pull over at the first driveway you see. Once you off the road, the angry driver speeds by throwing insults, curse words and middle fingers. You have just experienced road rage, my friend and you got lucky. It gets much worse than that.

What is Road Rage?

Road rage has become a national recognized epidemic and it has caused approximately 6.8 million car crashes per year. Officially, road rage is when someone becoming angry uses aggressive driving tactics and effectively weaponizes their vehicle against others on the road. Aggressive behavior while driving is subjective but can include anything that is intentionally harmful. Example behaviors could be bright lighting, tailgating, braking quickly, weaving through traffic, cutting off other drivers in traffic, and passing closely. If these behaviors are coupled with physical threats, screaming and rude gestures, you could be in trouble.

Road rage causes accidents from all the aggressive driving that accompanies it. If an angry driver slams on his breaks in front of you or even attempts to tailgate or tap your bumper, you could very easily head into a spin or slide off the road. Excessive speed also plays a part. When road ragers fly past you in an angry fume, they can quickly lose control, hit another car or crash into a guard rail. Angry is distracting. If you are driving fast and angry, it is a recipe for disaster.

How to Avoid Road Rage Accidents

If possible, get away from the aggressive driver. Slow down and put some distance between you too or turn off the road. Putting distance between your car and someone with road rage may be what saves your life. In rare cases, road rage gets even more personal and the angry driver follows you or attempts to run you off the road. In those instances, it is best to call 911 and keep driving until you reach a police station.

Don’t let road rage drivers suck you into their madness. It can be infuriating when other drivers are not courteous and are even rude but do not become angry or play into their game. Road rage quickly escalates and can turn violent. California has had such high rates of violent road rage we have specific laws against them. Violators can lose their license, get huge fines, be required to attend driving class and even jail time. Road rage is no joke. It is a serious crime that can cause devastating harm and death. Use caution on the road at all times, but be especially careful near a road rage driver. Your life could depend on it.

If you or a loved one has been injured in a accident as a result of road-rage, you will need a lawyer with experience. Call Moseley Collins at (916) 444-4444 for a free consultation.

Moseley Collins is a personal injury attorney serving those badly hurt throughout California. There is absolutely NO FEE to discuss your case and there is absolutely no fee unless we win and get you the money you are entitled to. We are on your side and know what to do to get you compensation and justice.