Over 40 Years of Experience
and No Fee Unless You Win!Contact Us NowFor a Free Consultation
Home
Practice Areas
Car Accident
Freeway Accidents 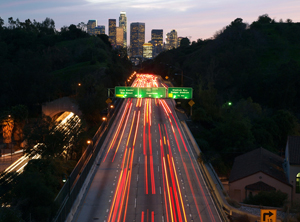 A freeway is an express highway which employs controlled access. It is designed for high speed traffic. They can be as large as five or more lanes of traffic in heavily populated metropolitan areas. There are often carpool or HOV lanes on freeways as well. The speed allowed on freeways coupled with the increased amount of vehicles makes them a perfect place for accidents.

Fatigue is a common cause of freeway accidents. Many freeway travelers are truck drivers hauling their loads across the country, sometimes hundreds of miles per day or more, often without sleep. While the trucking industry has put rules into place to keep sleep-deprived drivers off the road, many accidents each year are attributed to fatigue. Truckers aren’t the only culprit in this deadly statistic. All types of working people as well as vacationers and others driving long miles can cause accidents of the freeways.

Drivers who do not maintain their vehicles maintenance put everyone on the road at risk. Car accidents caused from blown tires, brake failure and slipping belts happen every year in California and are often fatal. Having the tires checked and the entire vehicle maintenance according to manufacturer’s instructions can stop many freeway accidents.

Many people do not consider head-on collisions when they think of freeway accidents because everyone is going in the same direction but a frontal impact collision doesn’t have to pertain to two cars hitting head on. This can also mean hitting a car from behind, hitting a deer or other animal and crashing into obstructions in the road. Another type of head-on collision that occurs on the freeway is when a wrong-way driver enters the freeway. A driver missing the signs for on and off ramps may inadvertently end up driving into oncoming traffic.

One of the biggest errors a driver can make on the freeway is stopping. Stopping abruptly can cause cataclysmic accidents resulting in multiple deaths. Even slowing pulling over and stopping poses a great risk not only for your car but for others passing you on the road. Excessive speed is another error that can kill on the road. Aggressive driving in and out of traffic, tailgating and other aggrieve behaviors cause hundreds of accidents each year. Being aware of negligent driving behavior can help save your life on the road. Distracted driving is also considered a drivers error. Many drivers pay more attention to their cell phones than the road which leads to accidents.

Driving Under the Influence (DUI)

DUI accidents are still prevalent in causing deaths on the freeways despite the many campaigns to raise awareness of it. Drugs and alcohol reduce the proper response times needed for driving leading to accidents and fender-benders of all kinds. As many as 39% of all fatal accidents are attributed to a DUI, according to the National Highway Traffic Safety Administration (NHTSA).

Accidents on the freeway happen every day and can easily result in death. Proper care and maintenance of vehicles as well as a firm awareness of the dangers of the road are required by every driver.

If you or a loved one has been involved in an auto accident, call Sacramento accident attorney, Moseley Collins.  There is no fee to start and no cost to you unless we win.